Aiken Promotions are proud to present a stunning line up of acts for this summers ”Live at the Marquee Cork 2011”, an annual music festival which takes place in the Docklands, Centre Park Road, Cork. This year marks the Marquee’s 7th year running with an array of impressive acts such as Christy Moore, Bob Dylan, The Frames, Elton John and Lil Wayne. The following acts have been confirmed for this year: 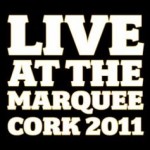